Hot Buttered Rum gets its hands dirty planting songs with roots in Appalachia and branches in California. Five-string banjo and five-alarm fiddle dovetail with doghouse bass to frame the voices of the sextet’s two busy songwriters. Twenty years in, with fresh mud under its fingernails, HBR’s driven, danceable music continues to find its way into the hearts of fans nationwide.

“Few things rejuvenate the soul like a warm fireside drink after an exhausting day in the snow. Hot Buttered Rum has that effect. Their original songs are instantly familiar and inviting.”

“As the band’s evolved, it has kept those [bluegrass] roots, but also incorporated the progressiveness of bands like Strength in Numbers and New Grass Revival, the looseness of a jam band like Phish, and the rock-and-roll edge of an acoustic band that opts to ad a drummer.”

“It’s that working man regimen that ensures their consistency from one offering to another. That’s the kind of quality that makes Hot Buttered Rum always seem to go down so smoothly.” 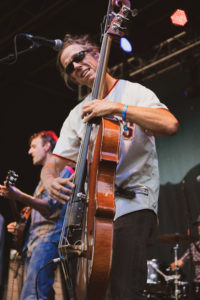 Bryan began his musical adventure at age 10 with the cello. He grew up listening to mostly rock ‘n’ roll groups like Men at Work, Rush, Yes, and Led Zeppelin. It was in the Tamalpais High School Orchestra that he first met Aaron Redner, future fiddler for Hot Buttered Rum.

In college, Bryan began playing electric bass in the jamband Oversoul. While playing in Oversoul, Bryan became more interested in acoustic music; he eventually transitioned from electric to acoustic bass and never turned back. His musical influences include Old and In the Way, Edgar Meyer, Phil Lesh, Stanley Clarke, and Gonzalo Rubalcaba. Coming back to the Bay Area after college, Bryan played in some musical groups with the members of Oversoul, eventually connecting with Nat Keefe and Erik Yates. 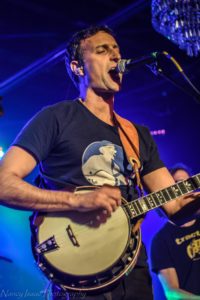 Erik Yates never met a song he didn’t like. “There’s always something to love,” he recently told Paste magazine, “something to learn from.” The Oakland, California-based songwriter and multi-instrumentalist has spent the last twenty years bringing that love to the world. His wide-open blend of soul, lyrical bluegrass and Americana has garnered him fans nationwide through his solo recordings, his sideman work and his steady contributions to Hot Buttered Rum. Erik has worked all over the US, both with HBR and with other groups including Railroad Earth and Rapidgrass. He’s performed, taught and toured in Canada, Europe and the Caribbean, and was recently honored to travel to central Africa with the band with the American Music Abroad program. 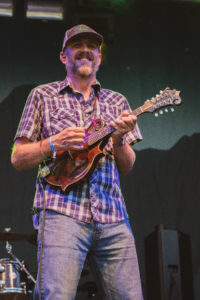 James enjoys bringing spirit and musical support to live  performance and recordings.  He performs on the drum set for Hot Buttered Rum, but he also plays bass guitar, guitar and vocals in a variety of musical settings.  He has lately taken an interest in the mandolin, too.  He has studied music extensively and graduated from California State University Sonoma’s jazz program. An early member of Groundation, he had the pleasure of performing with some wonderful artists including the late Mel Graves, George Marsh, Randy Vincent, Bobby Vega, Phil Lesh and Peter Rowan as well as warming up the stage for Diana Krall and Robben Ford. The lessons he’s learned over the years are exercised at every performance and he always strives to bring high quality musicianship to any project.  James believes that music offers a unique opportunity to convey emotion through sound; providing this experience can foster happiness, inspiration and a rewarding a sense of community. 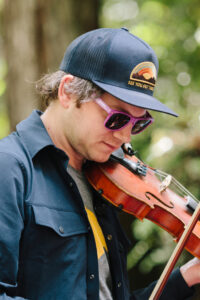 Ben Andrews discovered his passion for music early on, picking up the violin at the age of three, and he’s been playing and studying music ever since. After attending the New School University’s Jazz school he moved to San Francisco in 2006 and began playing with a number of local Americana and bluegrass bands, including Buxter Hoot’n, Poor Man’s Whiskey and the Jugtown Pirates. In 2012, he returned to Boston to study Contemporary Improvisation at the New England Conservatory. He honed his craft under the tutelage of renowned teachers like Nicholas Kitchen and Joe Morris, studying both classical and free music. While there he formed the group Choro Bastardo which went on to tour the country and give master classes at institutions like MIT and the Elizabeth Gardner Museum. After graduating from the Conservatory, Ben joined The Stone Foxes, playing all over the country and sharing the stage with acts like Wilco, Government Mule, and Social Distortion. He now plays fiddle with Hot Buttered rum and seamlessly brings his rock and roll and classical influences into the band. When he’s not performing Ben lives in Berkeley, California with his wife and daughter and teaches privately. 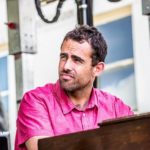 Jeff is a soulful player who lives to serve the song, and a skilled and versatile improvisor.

As a band member, Jeff’s touring and studio work includes hundreds of appearances with: 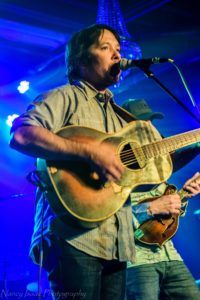 Nat’s panoramic songwriting and baritone vocals play a defining role in Hot Buttered Rum’s sound. In the course of a decade of playing professionally, Nat has written hundreds of songs, including collaborations with Zach Gill & Dave Brogan (ALO), Brett Dennen, Tim Bluhm (Mother Hips), Fred Torphy (Big Light), and his bandmates. He’s produced nine albums of his own and others’ music. He’s produced almost a dozen Concert Carnival variety shows, bringing together artists to create new work. Most importantly, he’s performed over a thousand times, singing and playing guitar to the best fanbase in the world.

When not touring, rehearsing, and recording with HBR, Nat lives in the Hayes Valley district of San Francisco. Outside of music, Nat enjoys the same things he’s liked since he was a boy: flyfishing, backpacking, backcountry skiing, urban-adventure bikeriding, and SF Giants baseball.

Another of Nat’s ongoing extra-curricular endeavors is the Nat Keefe Concert Carnival. The NKCC is an annual multi-media variety show, and has become a Bay Area holiday tradition. The goal is to bring together artists from different bands and different mediums to create new work in new ways. Past shows have featured all kinds of acoustic and electronic music, burlesque dance, film, circus arts, trick dogs, hula hoop, body percussion, tap dancing. The NKCC recordings feature musicians from the Mother Hips, ALO, the Peter Rowan/Tony Rice Quartet, New Monsoon, Everyone Orchestra, HBR, and much more. Music and video samples are available on YouTube, and CDs are available here.

Nat was inspired at an early age by musical parents and began playing guitar at age 11 and electric and upright bass at 16. The next year, guitar teacher Tony Khalife pushed Nat to study tabla – the north Indian drums. The rhythm section of the high school jazz band formed a rock band called STEW, in which Nat played bass. When Nat turned 18, his uncle Rodney Bolloni took him to Las Vegas for a crash course in the art of songcraft; Nat still cites his uncle as one of his biggest influences.

Instead of returning to sophomore year of college, Nat traveled to Nepal and India. Hiking and climbing in the Himalayas, Nat found that his passion is writing songs and singing for people. Nat returned to Lewis & Clark College, met Erik Yates, and formed the Foggy Notion Boyz, a stringband dedicated to the almighty Yeehaw Factor. Wild weekends with the Foggy Notion complemented long hours of study as Nat earned a degree in Composition and Ethnomusicology under teachers such as Joe Waters, Nora Beck, Vincent McDermott, Gil Seeley, Obo Addy, and Dan Balmer.

In three trips to Ghana, West Africa, Nat has studied polyrhythmic drumming, 14-key xylophone, and palmwine guitar. In 1999 a grant allowed him to travel there and produce a CD of field recordings (GHANA Boko Paa), a CD of original compositions (Music for Ordinary Motion), and a paper about the development of highlife music. He returned in 2001 to make a short film (Dances and Music of the Awudome Villages), and again in 2011 with twelve American friends to produce another CD (Girl Thursday).